"This Week in Review" Thursday

We did some rearranging in the school room. {That post is coming soon.}

We had a another first day of school.

To catch you up, we are now homeschooling an 8th grade boy, Dawson, and a 1st grade girl, Brynne. We have a sophomore girl, Kyndal, who goes to public school because that is what she wants. Without daily socialization, she would wither and die. And we have a 1st grade boy, Eli, who also still goes to public school. He has some special needs and sees a speech pathologist, occupational therapist and reading specialist. He also desperately needs the structure and socialization of the classroom (that he could not get at home to the same extent) and he needs to be pushed by a variety of educators and peers. We will bring him home someday, but right now he is a precious addition to his elementary school.


Brynne
This week we concentrated on getting Brynne (and me) used to her schooling at home. We had to prepare lessons for her on the fly, but came up with a pretty good plan to get us through this week. Next week we will concentrate on keeping it more on a regular schedule. She ran a fever one evening this week, and has some sinus junk going on, so we have been scheduling around that, too.
Basically we worked on the letter "A", which included worksheets, projects, the letter bag, and reading books. We concentrated on the 3 R's. And we got used to the idea of daily quiet time. {That will actually be her greatest challenge.} 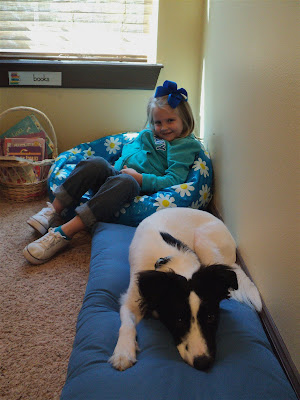 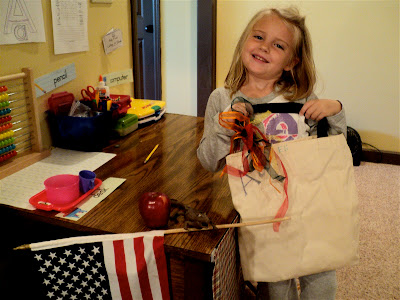 Yesterday we went to our local public library for a homeschool story and craft time. She really liked that and is looking forward to doing that every Wednesday afternoon. 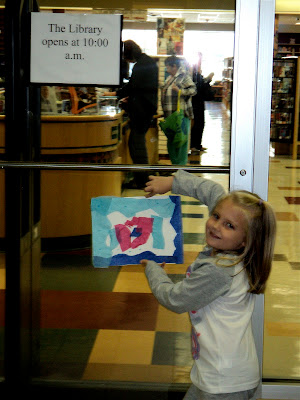 She wants to do school for about 10 hours a day. Finally yesterday afternoon I told her that if she wanted to do more school stuff on her own, she could. But, mommy was done with school. She would have me doing school from dusk 'til dawn if I let her.
I will be posting in the next couple of days about Brynne's curriculum and why we decided to school her as a 1st grader instead of as a kindergartner.


Dawson
Dawson had to get used to having Brynne here this week, and the addition of her to our schedule. We also started a new unit that I wasn't completely prepared for so we have eased into our week. We also had a change of one of our curriculum. So, this has been a slightly different week for us.
A World of Adventure ~ We have started a new unit on Ancient Greece. The corresponding Science topic is on the human body systems, first aid and health. We have been reading Aesop's Fables and scriptures (mostly proverbs) that show the results of choosing moral decisions versus immoral ones. Dawson's Language Arts lessons have been on spelling words using the /e/ rules and on re-writing fables after taking notes on oral recitations of it and including descriptive words. {He is really good at this!}
Social Studies ~ Our study of Ancient Greece has been off to a slower start. Dawson has read about typical foods in Greece and watched an episode of Everyday Foods that focused on Greek recipes. He has planned a full meal from appetizer to dessert and is going to cook a Greek meal for our entire family. {I cant wait! I love Greek food!!} Since the Greeks invented the Olympics, we were going to immediately start a Couch to 5K program. But now that Brynne is home we can't do that.
Science ~ Our unit this next six weeks is on the Human Body and we have started with the Body Systems. The curriculum very briefly covers each system, so I prepared a notebook for him of all of the body systems with additional materials and diagrams printed off the Internet. He has been reading those materials, highlighting notes, labeling and coloring diagrams and doing projects whenever I can come up with them.

He did a cell model using any household items he could find. 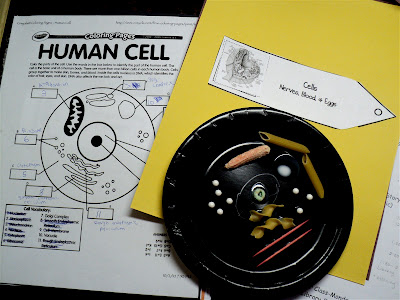 For the Integumentary System he did a fingerprinting project where he used a stamp pad and made each of his fingerprints on two separate squares of paper. Then he mixed them up and had to find their matches. 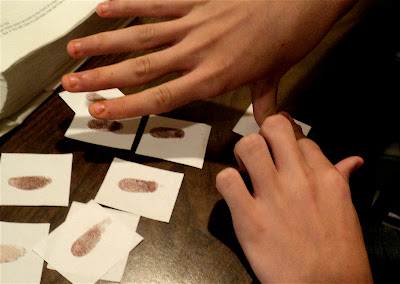 For the Muscular System he did an experiment on the role of muscle fibers and the importance of working muscles. And for the Skeletal System he did a computer game called Whack a Bone.
Fine Arts ~ Dawson made a Fresco painting this week. He chose to make a koi fish. This project was similar to our Ancient Egyptian Relief. He mixed the plaster and poured it into a shoebox lid. Just before it hardened he painted his picture so the paint mixed in with the plaster. 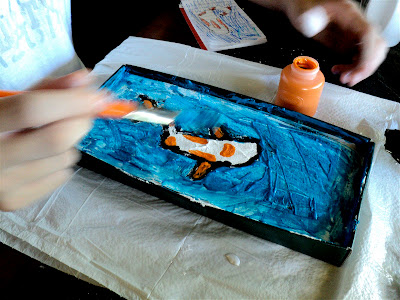 For the next few days he will be sketching the three different types of Greek Columns: Doric, Ionic and Corinth.


Math ~ We gave up on Saxon. It was just too boring and time consuming and he hated it. So, we purchased Life of Fred, both Fractions and Decimals and Percents. He did his first lesson yesterday. I think he is going to enjoy it so much more! If all goes well he should be able to finish both of those books and Pre-Algebra this school year. 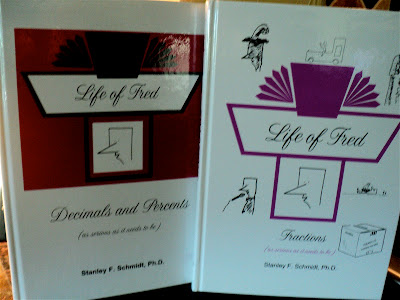 Other ~ Dawson is now reading a book called The Sloppy Copy Slipup. He is still doing his regular typing lessons and Spanish lessons. Nothing exciting to report there.

** I am hoping to have things a little more prepared and organized before we start this next week.