How to Make Christmas Special for the Big Kids

This is the first year that we had no "believers" in our home. That meant no clandestine Santa deliveries, cookies and milk, and reindeer food. Actually, it was kind of nice! I've spent 21 years sneaking gifts under the tree. In fact, for many years, Rick and I stayed up half the night on Christmas Eve wrapping presents because there just wasn't a time or place to do it without getting caught.

But with no belief in The Big Guy in Red, Christmas can lose its magic! How do you make Christmas special for big kids (and by "kids" I also mean those 6'3" ones and the ones who are married with their own babies)?

Here are a few things I do to keep things fun ...

The Christmas Eve gift. Each year for Christmas Eve we all get to open one gift, and it's always been the Christmas pjs. But some of us don't even wear designated pjs to bed anymore, so I decided to chuck that idea and come up with something else fun. I bought each member of our family a fun Christmas t-shirt to wear on Christmas Day since we just stay home all day. I had a blast picking out just the right t-shirt for each person. Some were Naughty. Some were Nice. 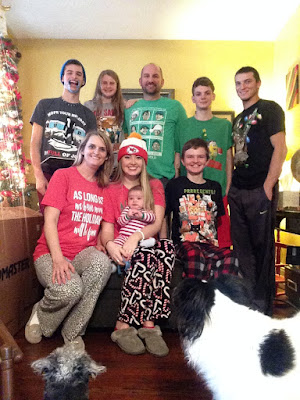 Whose Gifts are Whose? I wrapped all of the gifts ahead of time and put them under the tree. But none of them had tags on them. Each kid's gifts were wrapped in their own wrapping paper, but they didn't know which one was theirs until Christmas morning when they dug to the bottom of their stockings to find a small piece of that wrapping paper. It's super fun to watch them standing over the gifts trying to figure out which pile is theirs! They were usually wrong. 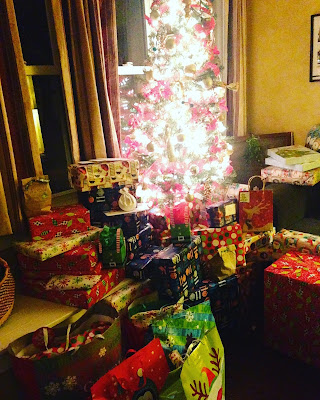 The Stockings. I still do stockings for all of the kids, my son-in-law, and the friend of Dawson's who is living with us. I try to put in a couple of small gifts, and they also always get underwear! I think the underwear is secretly their favorite gift of the day!

Family Game. Each year I buy the newest Just Dance game for our Wii. Then we boogie down as a family on Christmas Day and New Year's Eve.

Traditions. Every year we have a big breakfast of biscuits and gravy and cinnamon rolls. I have an open invite to my parents and my sister and nieces. After we open presents we eat. Then that evening I fix a large Christmas meal for anybody who can be here. The family loves that there is always a couple of yummy meals that day. Nobody goes hungry, that's for sure! And it's nice that family feels like they can just come and go. 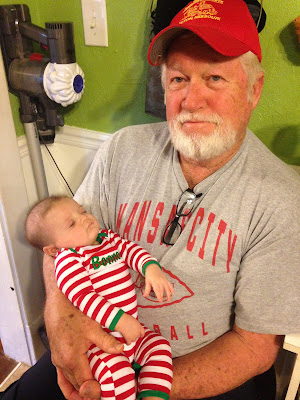 A Movie. We usually watch Christmas Vacation on Christmas Eve. But it is usually late and everybody starts falling asleep. This year with Bennett only being 4 months old and on a pretty strict sleeping schedule, watching it on Christmas Eve was not going to work. Plus, Dawson and Chad had to work that evening. So Christmas evening, after we were all stuffed and tired, we snuggled up together to watch our favorite Christmas movie.