By Nicole December 21, 2011
On Monday, Eli had his class Christmas party. They had snacks, made a couple of crafts, and had a Secret Santa gift exchange.

Eli got a Nerf gun for his Secret Santa friend. 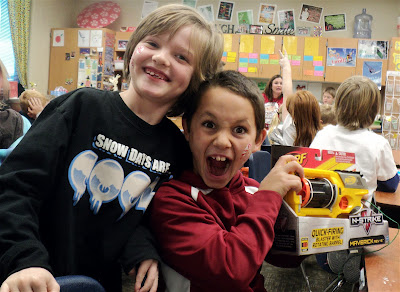 The boy who drew his name happens to be one of his best friends. The kids each wrote four clues about who was their Secret Santa friend. They stood at the front of class and read the four clues and then the students tried to guess who it was. His friend gave these four clues about Eli:
His friend knows him so well. Eli does not like to watch movies in class. A lot of movies scare him and he feels trapped in a classroom, so kind of freaks if he has to watch one. When they start to watch a movie, he gets up and goes out into the central pod and gets on the computer. He's always been like that and all the kids know that about him. As soon as the clues were read, his teacher said, "All together now ..." and the kids yelled, "EEEEEEEli!" His friend got him a $10 gift card to Gamestop. 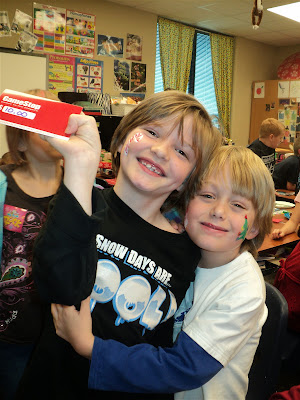 He'll be spending that at their Buy 2/Get 1 Free promotion that starts tomorrow, on his birthday!