What have you 'fallen for' recently?

Fall boots. I have bought 3 new pair in the past several weeks. Now if the temps will just cool down so I can wear them!!!

What's something you're 'squirreling away' for later?

Pizza coupons. When you buy a pizza from Casey's you get a tear-off coupon on the box. When you collect 10 coupons you get a free large pizza. We hardly ever buy pizza so it takes us forever. But my mom cleans our town's City Hall and the policemen throw their pizza boxes away without keeping the coupons. She takes them for me when she takes out their trash. That helps us get free pizzas faster!

How do you like your apples? Sweet? Tart? Crisp? Cooked? Apples are one of the superfoods for fall ... how often do you eat an apple either plain or as part of a favorite recipe? What's your favorite variety?

I like a nice, crisp apple, dipped in either homemade fruit dip (cream cheese, brown sugar, vanilla) or dipped in almond butter. My favorite recipe is my mom's apple salad. We have it a couple of times a year. I like pretty much any kind of apple, but only Granny Smith if it is baked in something. It's too tart for me.

According to Fodor's the ten best fall foliage trips in the US of A are ... Aspen Colorado, The Catskills New York, The Berkshires Massachusetts, Columbia River Gorge Oregon, Green Mountain Byway Vermont, Enchanted Circle Scenic Byway New Mexico, Great Smoky Mountains of North Carolina and Tennessee, Upper Peninsula Michigan, Lake of the Ozarks Missouri, and Glacier National Park Montana. Which would you most like to visit this fall and why?

I have been through the Ozarks many times in the fall, especially around Branson, Missouri, because we live in Missouri. And it is, in fact, beautiful. I would love to visit the Great Smoky Mountains and also go on a cruise up the east coast in the fall.

The topic of legalizing marijuana was raised in the most recent televised political debate so let's wade in, too. Twenty-three states and the District of Columbia currently have laws legalizing marijuana in some form. Four states have legalized marijuana for recreational use. Your thoughts?

Are you okay to watch a movie already in progress, or to jump into the middle of a TV series, or must you see it from the beginning?

I am a comma freak and am sure I use commas more often than necessary. It, likewise, drives me crazy when others overuse commas or use them in inappropriate ways.

Insert your own random thought here.

Happy First Day of Fall! Here is my favorite place to hang out this time of year ... my porch swing. 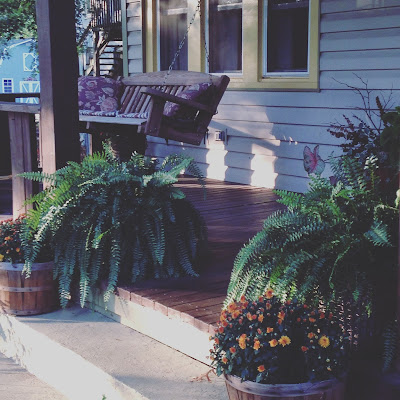