How Well Do You Know Him? 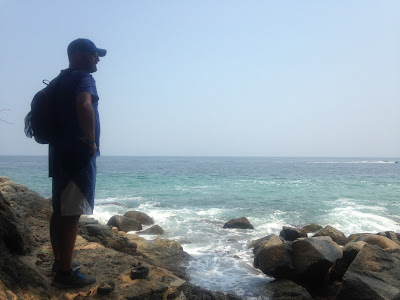 I saw this and thought it would be fun to do in honor of Father's Day. The first few questions were easy, but the further I went the more I am thinking I might not know him as well as I think I do. I don't know, what do you think, Rick?

He's sitting in front of the t.v., what is he watching?

He is watching some kind of sporting event and is flipping back and forth between it and two movies that he has already seen, one probably being a cartoon movie.

You are out to eat, what kind of dressing does he get on his salad?

Name a food he hates.

Hmmmm .... I honestly can't think of one food item that he hates.

You go out to eat and have a drink, what would he order?

After he jokes about having Crown with a lime (inside joke), he will probably order a Stella Artois or a Corona.

He likes all kinds of music, especially 80's movie tunes. He knows every word to every song in Grease 2 if that tells you anything.

What is his nickname for you?

No nickname, but he does call me 'babe' pretty often.

If he could collect one thing, what would it be?

Rick is NOT a collector! If I had to choose something I guess it would be golf hats, but only until they have been sweat soaked a few too many times.

What would he eat every day if he could?

Probably sushi? Or Coneys? Again, he is not a picky eater.

What is his favorite cereal?

What would he never wear?

I can't say never because he has a few times, but no flip flops if at all possible. He wants his feet covered!

What is his favorite sports team?

What is something you do that he wishes you wouldn't do?

Although having an independent wife has its advantages, I know that he wishes I was more dependent on him. Also, my inability to brainstorm drives him crazy, and he hates when I interrupt him before he has finished what he was going to say.

You bake him a cake for his birthday, what kind is it?

No cake, actually. Maybe just some fresh, ripe cantaloupe or some ice cream.

What could he spend all day doing?