Under the Blood Red Sun ~ Review and Giveaway

This year the kids and I embarked on a journey. We decided to learn all we could about World War II from the beginning to the end. Although the war was about much more than Hitler and the Holocaust and the attack on Pearl Harbor, those two events were major ones.

These topics are extremely difficult to discuss with children. My two are ages 12 and 10 and are on the mature, albeit emotional, side when it comes to dealing with such events. I decided early on that I would not shield them from the horror that was World War II. But I also wanted to be sure to mix in some of the personal and positive stories from that time period. It was an excruciating time in so many ways, but there were also some amazing men and women who showed themselves worthy of being named heroes.

Seeing the war through the eyes of children was also an important aspect of our journey. We studied Anne Frank and how children contributed to the war on the homefront.

To view Pearl Harbor from the perspective of a child we chose to read the book Under the Blood Red Sun by Graham Salisbury. This book was recommended by the National World War II Museum in New Orleans (one of our primary resources) so I purchased it while visiting there last April. You can go to the museum website to view a webinar with Graham Salisbury that is definitely worth a look. It is the first webinar on the Archives page on THIS LINK. 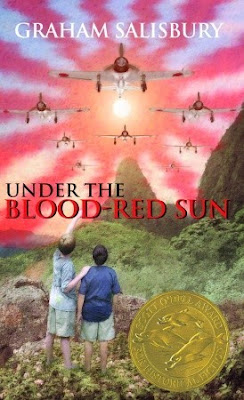 Tomi was born in Hawaii. His grandfather and parents were born in Japan and came to America to escape poverty. World War II seems far away from Tomi and his friends, even though the harbor is full of warships. They're busy playing ball on their eighth-grade team, the Rats. But then Pearl Harbor is attacked by the Japanese, and the United States declares war on Japan. Japanese men are rounded up. Tomi's father and grandfather are arrested. Taken away, Tomi must be the man of his family and help his mother and little sister survive. It's a terrifying time to be Japanese in America. But one thing doesn't change: the loyalty of Tomi's buddies, the Rats. ~ taken from the book jacket

Can you imagine being and feeling 100% American as a child and having your country turn on you just because you look a little different? How terrifying! Tomi is just a boy, playing baseball with his friends, going to school, doing all things that ordinary American boys do every day. And then his native country attacks his current one and he and his family are ostracized and terrorized. A big problem for him and his family is that they still carry on Japanese traditions, and others in their town know it.

The family has pigeons that their neighbors suspiciously report as carrying messages to the Japanese government. And Tomi's grandfather still holds true to the traditional Japanese ways and waves his flag around their property. It is assumed by the American government that he is somehow a spy for the Japanese.

And then there is poor Tomi, just trying to be a regular American boy in the middle of the conflicts between his old country and his new one.

In this story Tomi shows his bravery in continuing to care for his mother and sister, in doing all he can to keep track of his father and grandfather's whereabouts, and in just maintaining his status as a true American citizen.

Red Sun Productions graciously mailed me a copy of the movie adaptation of the book with the same title, as well as some bookmarks and buttons for my children. I agreed to do a review of the movie in exchange and was not compensated in any other way. All opinions of the movie and book are my own. 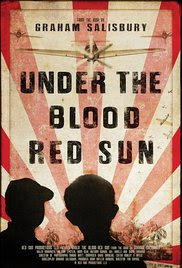 Tomikazu "Tomi" Nakaji and his best friend Billy Davis are playing baseball in a field near their homes in Hawaii when Japan launches a surprise attack on the U.S. at Pear Harbor. As Tomi looks up at the sky and recognizes the blood-red sun emblem on the fighter planes, he knows that his life has changed forever. Torn between his love of all things American and the traditional ways of his parents and gramps, Tomi feels frightened and ashamed of his native land. Tom's friendship with Bill is soon tested as prejudice divides their island community. He must find the courage to stand up to neighborhood bully, Keet, while protecting his family's honor and its katana, a centuries-old samurai sword. ~ taken from the movie jacket 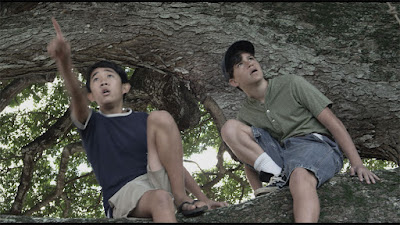 Especially in regard to my children, I always like to view a movie adaptation of a historical fiction book if it is available. I appreciate how the movies oftentimes focus on topics in the book that I, perhaps, glossed over or didn't give particular emphasis.

The movie adaptation of Under the Blood Red Sun really focused on Tomi's stance directly in the middle of his two beloved countries. The book seemed to relate to Tomi more as a child, but the movie related to him more as a child being forced to take on the role of a young man. I loved his character in the movie. It was so clear how much he loved his family and their traditions, yet he was still wanting to have the respect and approval of other Americans. He was forced to do some very mature things for such a young man, and the movie did a brilliant job of demonstrating his angst yet courage in doing so. 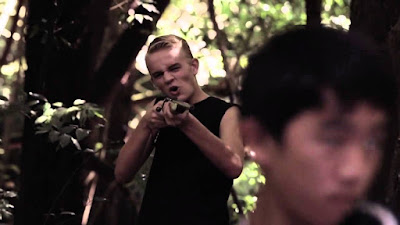 Tomi was definitely portrayed as a young hero. He showed strength of character, loyalty, and a maturity that children of today's age rarely see in their peers. 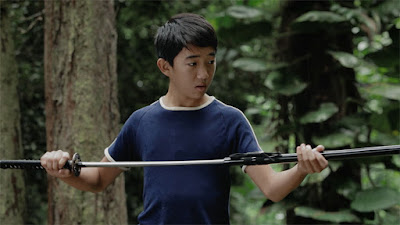 The movie did such a brilliant job of showing children that there are two sides to every story, that war affects all involved in unimaginable ways, and that even children can rise up and make a difference during difficult times.

For any study of the attack on Pearl Harbor, I would highly recommend both the book and movie of Under the Blood Red Sun. I felt that it highly enriched our study of this important time.

And so that you can enjoy it, too, I am giving away my copy of both the book and dvd, as well as two bookmarks and two buttons.

All you have to do to enter is leave a comment below telling me what subject you are most excited about teaching your children this next school year. Entries will be accepted until 11:59 p.m. on Sunday, May 22nd. On Monday morning I will draw names the old-fashioned way and will notify the winner. Please leave me your e-mail address in the comment, as well, so I know how to contact you for shipping information.

You can read all about the movie at the Under the Blood Red Sun website. The movie has a runtime of 98 minutes and is suitable for children ages 8 and above. The dvd can be purchased from the website or from Amazon.

For a study guide from Random House focusing on conflict resolution and tolerance issues related to the novel, you can go to THIS LINK. You can also request a teacher's novel unit consisting of 25 pages of discussion questions, activities and chapter tests created by Janice Zmuda by sending an e-mail to underthebloodredsunmovie@gmail.com and requesting same.