How We Beat the Flu in 24 Hours with Essential Oils


** Disclaimer: I am, obviously, not a doctor nor attempting to tell you that you should not go to the doctor if you are experiencing flu-like symptoms (especially a child or the elderly). I am also not guaranteeing that any of the things you read in this post will help your family. This is just this family's experience with the flu and how we conquered it in 24 hours. Perhaps you can take something from this post to help your family, too.

On Thursday morning Macie's mom (the little girl I care for) texted me to tell me that Macie had tested positive for the flu that morning. Knowing that we had been exposed the days before, I jumped into action.

I had recently been looking for some non-medication alternatives to severe and recurring sinus headaches (because the sinus medications don't work anyway). I came across a recommendation to use Eucalyptus oil in a diffuser. I don't have a diffuser but I do have a vaporizer that I run in our main living area everyday to attempt to keep our humidity levels in the safe range. I went to the Amish bulk store and purchased Eucalyptus to add to the vaporizer. Within an hour my headache was much less and throughout the next day it was eliminated to almost nothing.

So when I learned that Macie had tested positive for the flu, I cranked up the Eucalyptus in the vaporizer. I also sprayed Lysol on every surface Macie might have touched and washed all of the blankets she had used.

On Friday morning Brynne walked out of her bedroom and I instantly knew she had the flu. She had a bad sore throat, was very congested in her chest, had a disgusting cough, had a snotty nose, had a fever, and the "flu eyes". (If you have ever had the flu or a child with the flu, you know what eyes I'm talking about.) I put her straight in the bathtub with a cup of hot green tea with honey. She even had a little accident in the tub, if you know what I mean. Girlfriend was SICK!

When she got out of the bath I already had her convalescent bed all ready for her with plans for her and I to do nothing but get her well. I moved the vaporizer next to her and made sure it had a steady concentration of Eucalyptus. 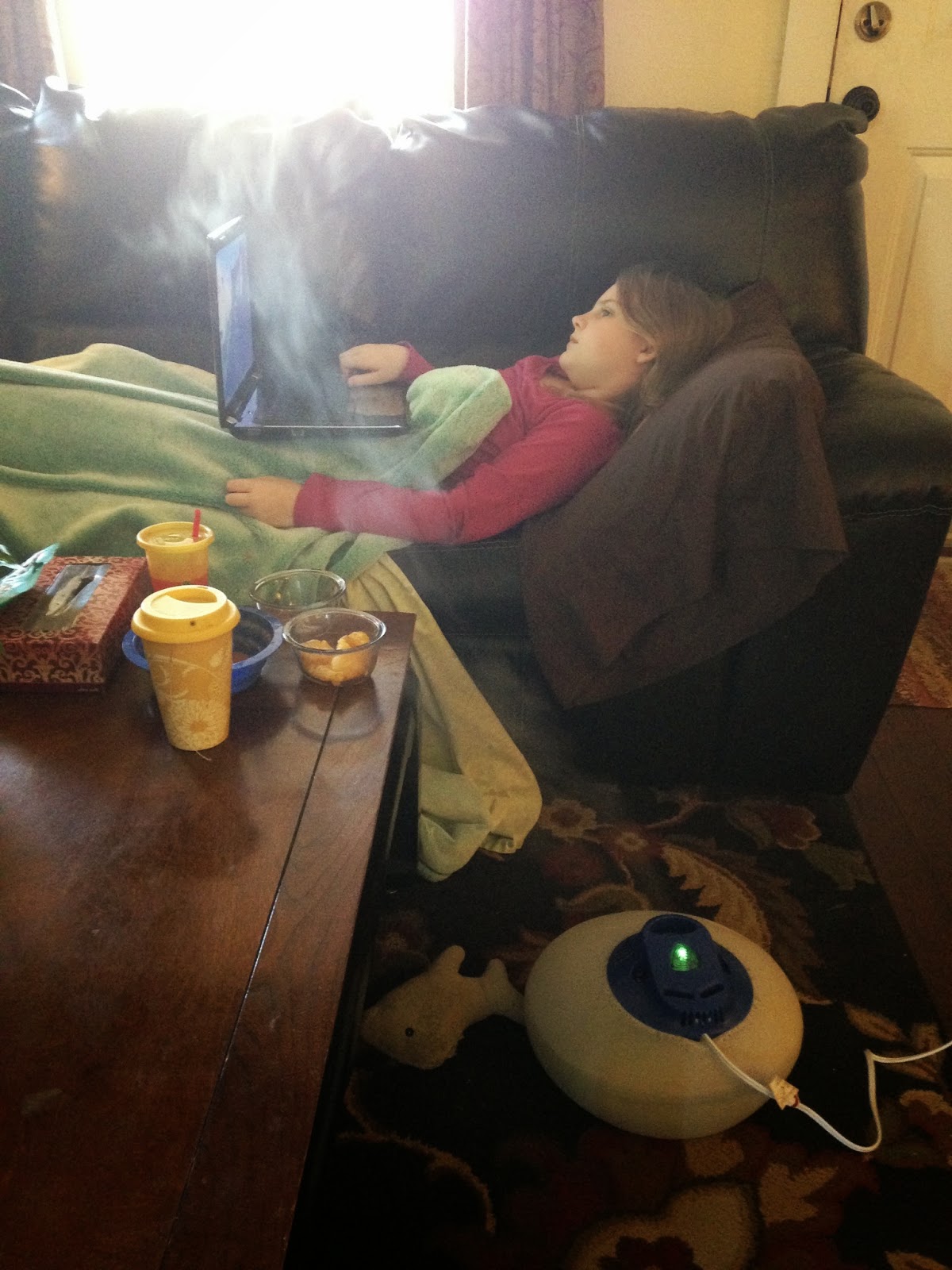 I ran to the store to get the necessities of being sick ... some Sunny D, V8 Splash, ginger ale, bananas, oranges, some sweet treats (sometimes you just need a sweet treat when you feel cruddy), and ingredients to make homemade chicken and noodles.

I had jumped on the computer before I left for the store to see what essential oils were best for the flu. I got lots of hits on Thieves by Young Living or OnGuard by doTerra and then DIY Thieves formulas. I took a picture of one of them with my phone and after the grocery store went straight to the Amish bulk store. There I purchased more Eucalyptus (liquid gold, in my opinion), Rosemary, Cinnamon, Orange, and Cloves essential oils. When I got home I mixed it according to the recipe and added an equal amount of olive oil as a carrier oil. Then I made a separate batch for us adults and put it into a marked, empty Eucalyptus bottle. (All total I spent $20. Much cheaper and less irritating than a doctor appointment. I also quadrupled the recipe. And I still have tons of oils left to make more when we need it.) 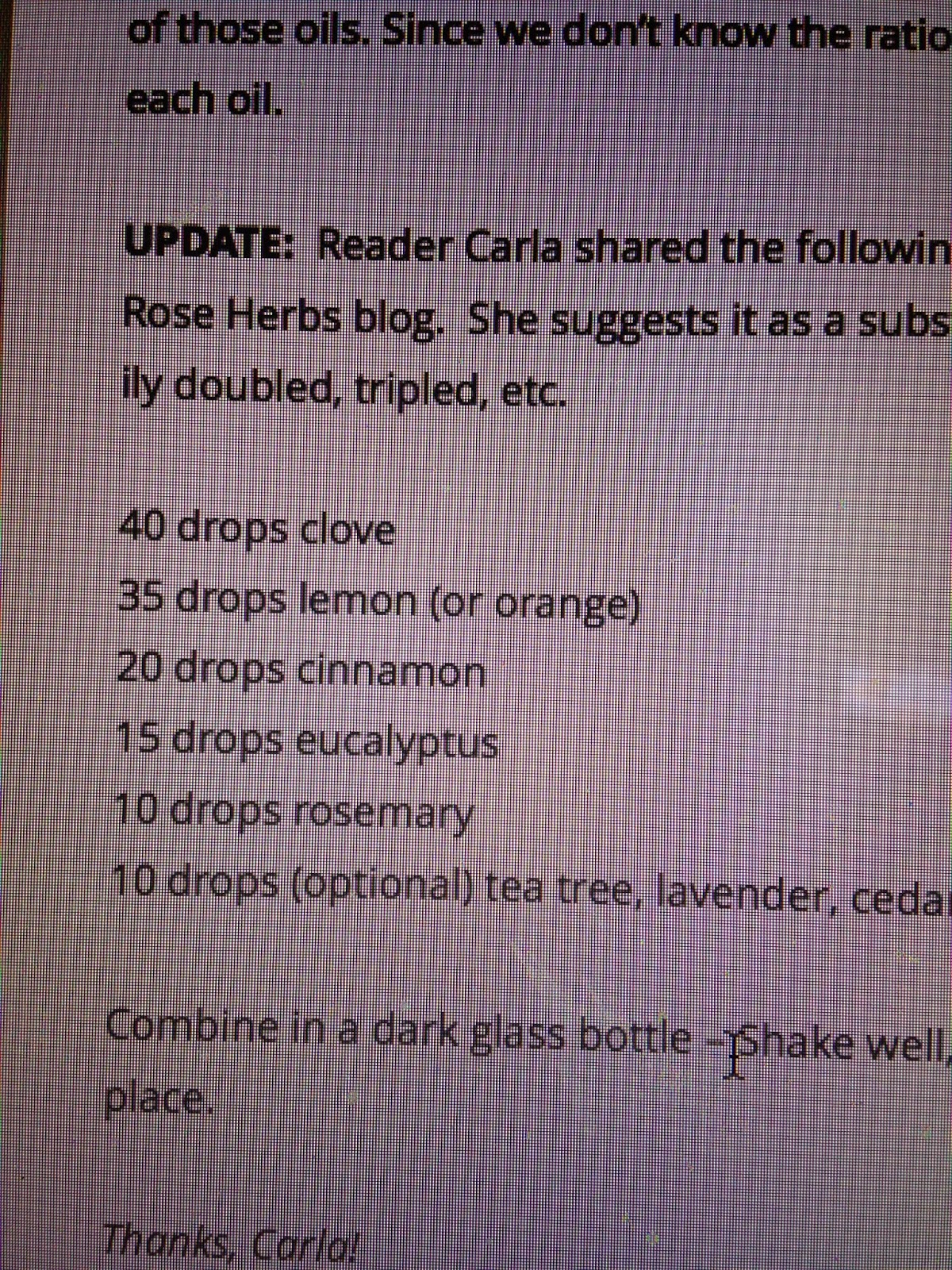 Our go-to meal for sickness is homemade chicken and noodles. I boiled a whole chicken (to get the best broth) in a stock pot with about four cloves of garlic and a half of a chopped onion. I alternated boiling and simmering the chicken for about 3 hours. Once the chicken was done I took it out of the pot and strained off the garlic and onions (so my kids wouldn't freak if there were "chunks" in their soup). But the broth was still so fragrant! I boiled the noodles in the broth, added some finely chopped carrots, and added pieces of chicken. It was delicious and just what the doctor ordered! 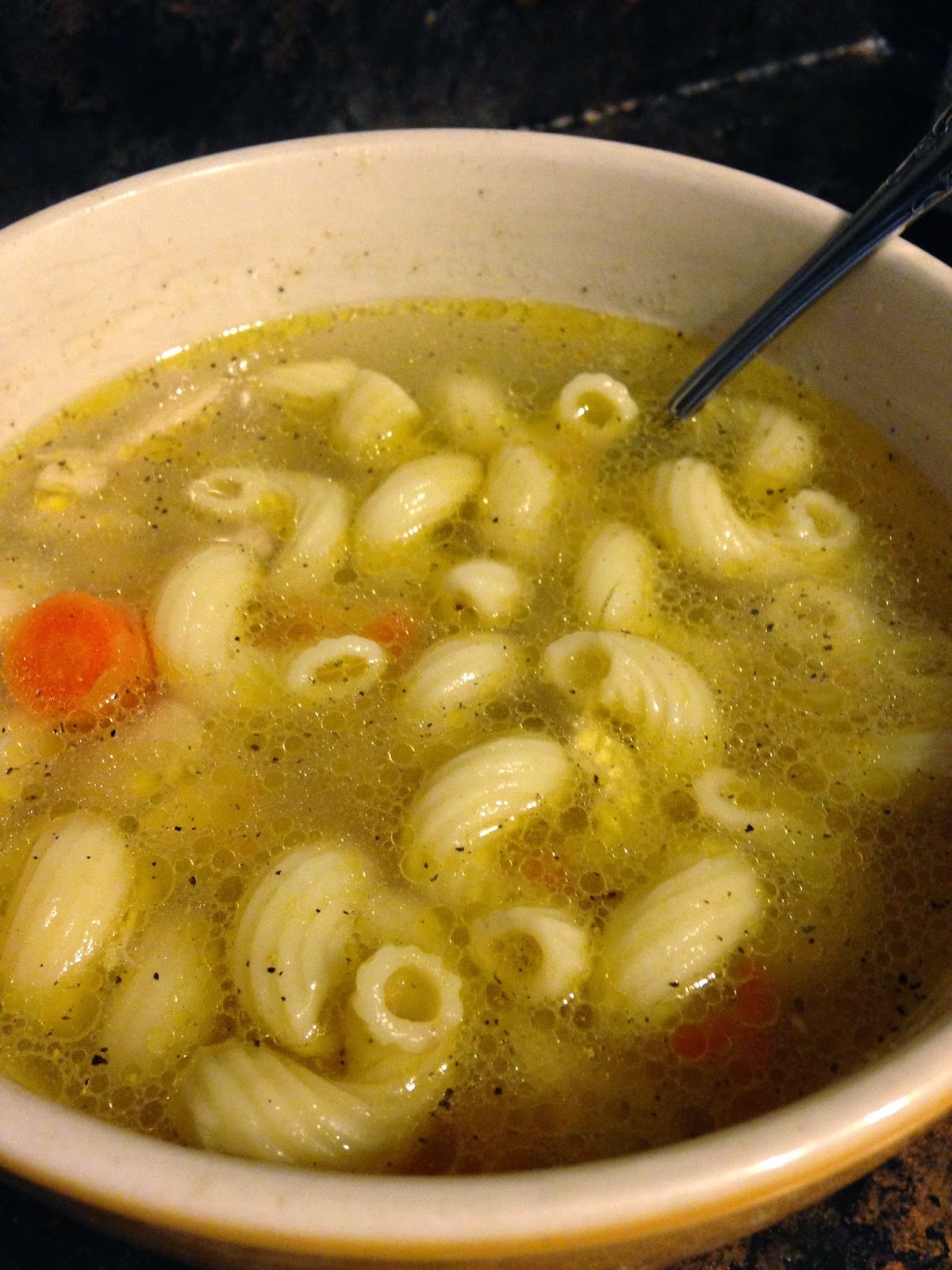 I told Brynne I didn't want to use the Thieves-ish oil (that's what we are calling it) until she was really feeling bad so that we could really see if it worked. With the Eucalyptus vapor, lots of fluids, and healthy meals she really didn't feel too terribly bad most of the day ... just lots of coughing and blowing her nose. Her fever hovered between 99 and 100 most of the day, which is usually as high as her fever gets because she has a naturally low regular body temp. At about 8:00 p.m. her fever was going back up and she looked as though she didn't feel well. I used a cotton ball dipped in the Thieves-ish oil and rubbed it on the bottom of her feet and she put on socks.

By 9:30 p.m. her fever was gone! She slept with me, with the Eucalyptus filled vaporizer in the room with us, and she had a good night's sleep. She slept until almost noon the next morning and when she woke up she had NO SYMPTOMS! Her nose was clear, she was not coughing, her throat didn't hurt, she had no fever, and her stomach didn't bother her anymore.

Later in the day her nose started to clog and she had a slight cough, so we did another dose of Thieves-ish to her feet. She said, "Mommy, it really does work!"

Now, I can't say definitely that any of the essential oils worked in eliminating the flu in 24 hours. I cannot even say that Brynne had a positive case of the flu (as I did not take her to the doctor ... I am completely against going to the doctor over every little illness. I also knew the doctor would want to put her on Tamiflu which I won't let my kids take as it can cause neurological problems, as explained to me by our favorite pediatrician in Oklahoma).

What I can say is that Brynne had all of the flu symptoms. In my opinion, she had the flu. I can also say that after using the essential oils, keeping her hydrated and fed with healthy foods, and having her rest, she had nary a flu symptom just 24 hours later.

Coincidence? I just don't think so.

I have now had two positive experiences with essential oils. Because of it I decided to see what oils are best for reflux/heartburn as I have to take prescription strength Prilosec twice a day. Research recommends a drop or two of Lemon oil in a glass of water. I picked up some Lemon oil today and added it to my cup of Chamomile tea. I am going to experiment to see if it will be possible for me to go off the Prilosec at some point. Even if it doesn't work, it is delicious and I plan to continue to add it to my tea anyway. 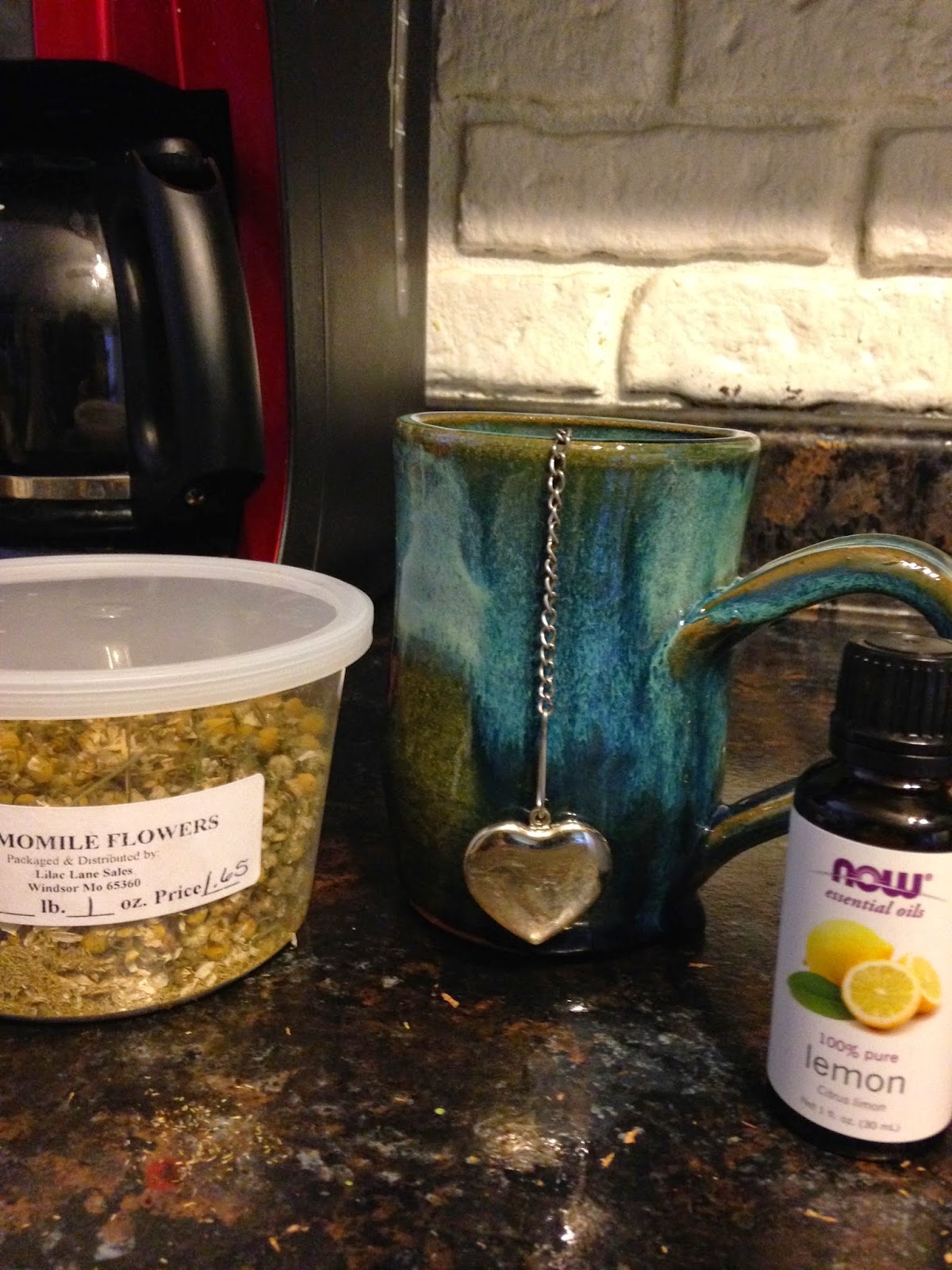 My advice? Go buy a $15 vaporizer at Walmart. Go buy some basic essential oils. Research which ones are best for what, and give them a try.

Oh, and the Lysol I used on Friday? No more. A couple of drops of Thieves-ish can be added to a quart of water and put in a spray bottle to be used in place of Lysol.

I am so glad I finally tried essential oils! And so is my child who didn't have to suffer through days of sickness. 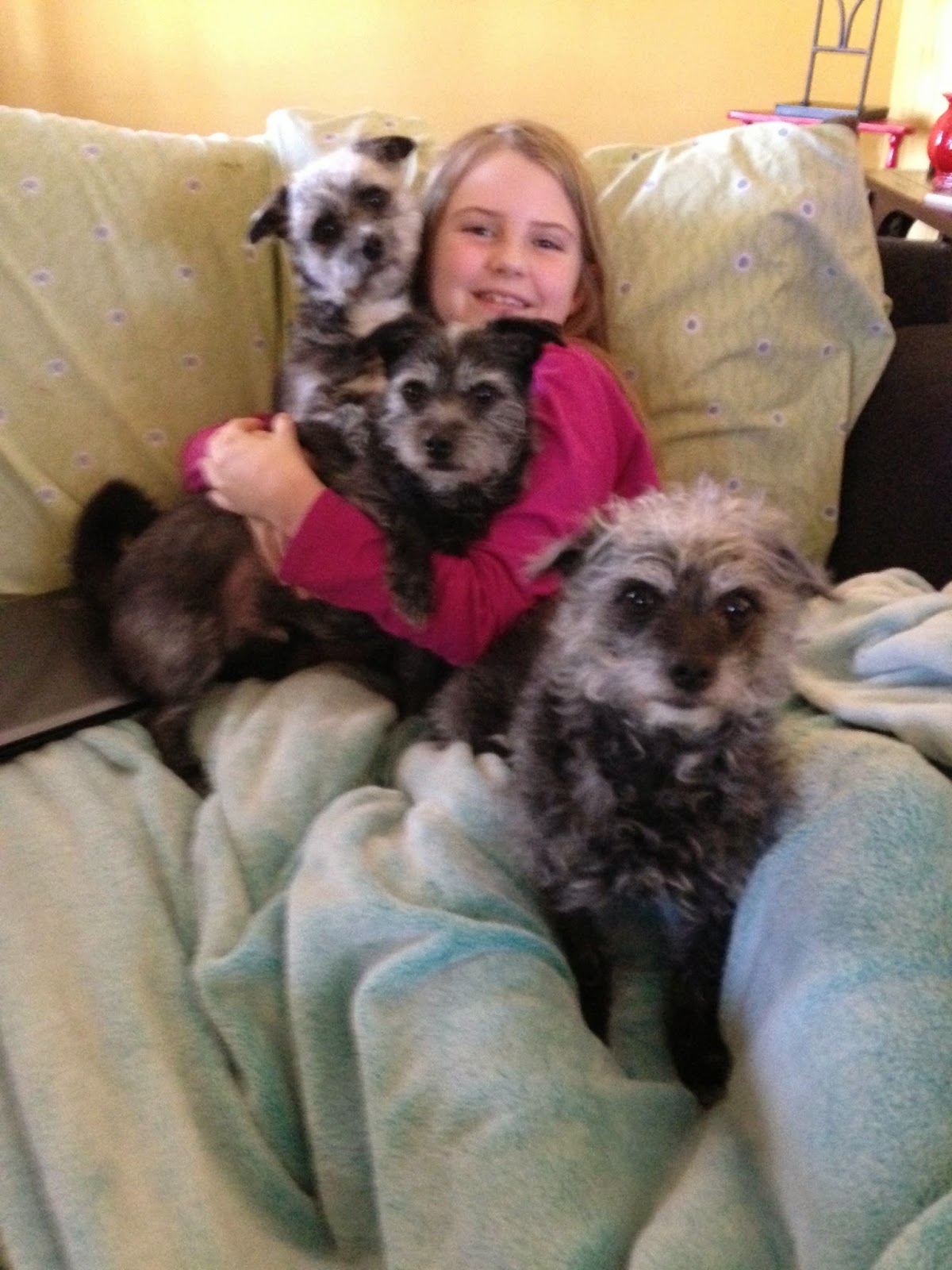