1. It seems that over the past couple of weeks lots has been happening in the career department in our family ... a lot of potential! This week the high school received a phone call from a businessman in a nearby town who is looking for an apprentice/assistant of sorts to do multiple tasks for his businesses, including a good deal of computer graphics and online business sales. He was looking for potential graphic design candidates to interview. The computer teacher at the school chose only Dawson and he called the man for an interview. I took him to the interview yesterday and it went really well. It is one of those supernatural situations that you just know is God and Dawson is super excited at the prospect of the opportunity. It's a wait and see right now. But, if it works out, it may mean some extremely exciting things for Dawson's future. He would not have received this opportunity without being the smart and good kid that he is. He deserves this!

UPDATE:  Dawson received a voicemail this morning from the businessman. He said that his wife was so impressed with Dawson's character and with the things that he shared with her that she wants him. They are not going to interview anyone else and wanted to know when Dawson could start doing some work. ALL Glory to God!! ALL Glory!

2. My future son-in-law received some good news in his career recently, as well. He is an iron working apprentice. As he is a newbie, he has definitely had to take his lumps this past year, not working more than he has been working. This guy is a worker and has hated having time off. But when he does work he makes a great impression because he has one of the best work ethics I have ever witnessed. He basically got handpicked by a foreman in one particular company in his union who said he wants Collin on his team at all times. So Collin has started working for this particular foreman who works for a company that is working jobs pretty much all the time. No more going to the Hall to stand in line for jobs. His future is much more secure. I am so proud of the hard-working young man that my daughter is marrying. I know that he will always take care of her.

3. And Rick called me last night to tell me about a potential opportunity for him and our family. It would allow him to be based out of our home here in Missouri (no more living in Oklahoma during the week). But it would have him traveling potentially 8-10 months of the year going to job sites. But the exciting part about that is that the kids and I would have the freedom to travel with him whenever we wanted. The kids want to explore the United States and love to travel and see new things. This would give us the opportunity to do as much of that as we would want. We can easily homeschool on the road (a dream of mine). I also have a plan for how to make the traveling feel a little less like traveling and more like home on the road. And those weeks that Rick is not working he would be home with us. The even better part of the job is that he receives pay even on the days that he is not out working. He just makes more on the days that he is. Sound too good to be true? Well, we know the company very well, as it was the first company that Rick ever worked for when we moved to Oklahoma almost 15 years ago. It is a very solid company, family owned, and lucrative. We have always missed aspects of him working for that company because of the way they take care of the families. He has an excellent working relationship with everyone at the company, and we know they would take care of us. He would be taking the job of a gentleman who would be retiring who has done this job for many, many years. It's a dream job. And it has lots of neat potential for us as a family.

4. Me? Nah, I don't have any job prospects. But I don't want any. I have my hands full as it is. What am I up to? Finishing up our school year and helping the older kids with all of their life changes as young adults (full-time job, believe me!). I am now on Day 10 of the 21 Day Fix. I am not sure if I have lost any weight, maybe 1-2 pounds, or inches. But I can tell you that I feel amazing! The workouts are exactly what I like to do. I am feeling much stronger, and I am noticing some definition back in my legs (which means I am not going to be grossed out by myself in a swimming suit this summer). I am also running 3 days a week training for a 5K on May 2. I ran a mile straight the other day, 14 minutes straight, which is the first time I have done that in about 5 or 6 years. I am pretty happy with my progress. I am not following the nutritional aspect of the Fix, but am continuing to track my calories and nutritional values on MyFitnessPal, which is what I prefer. I am happy with how I am eating (really don't think I could do much more than I am doing), so losing any weight is not really a concern of mine now. I feel better in my clothes and just feel better overall, which was my ultimate goal.

5. Let's see. Other things going on. Well, Brynne is still doing Girls on the Run a couple of afternoons a week and Eli finished up his Lewis and Clark Class at the library. We'll be starting gardening class and book club soon. And Brynne starts softball in the next couple of weeks. I have been enjoying watching the kids do some unschooling. They are learning yoga on Wii fit, practicing cursive handwriting on the whiteboard whenever possible (Brynne), digging into the encyclopedia learning about video game systems (Eli). Brynne wants to join another class with Minecraft Homeschool. She has picked out a creative writing course that has her learning writing and then building her story on Minecraft. The 5K is coming up the first weekend in May. Then we have state bowling tournament the second weekend. Dawson graduates from high school the third weekend. And Kyndal gets married the fourth weekend. Then we leave for our vacation to the Caribbean to celebrate all of those events. Yeah, we're busy. But oh ... so .. happy!!

Also linking up this week with Emmy Mom. 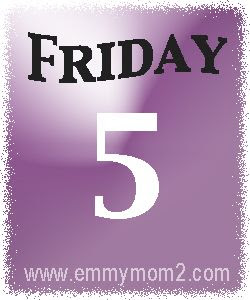