Weekly Wrap-up ~ Spring Break and the One After

My last Weekly Wrap-up has been done for over a week waiting for me to take a few minutes to put some photo collages together. I've just been so busy during the day and so tired at night! So this wrap-up will contain happenings from the past two weeks.

We had an amazing Spring Break two weeks ago! We spent Monday through Wednesday at home just sleeping in, playing, relaxing, and enjoying ourselves. We had mostly springlike temps and even some sunshine. Kyndal and I started doing the 21 Day Fix on Monday so we were so sore for the majority of the week that little else got done. But it was fantastic to have nowhere to go and nothing to do!

On Thursday the little kids and I went to Oklahoma to spend the weekend with Rick. We arrived just in time for pizza on Thursday night and then came back to his house to watch a movie and get to bed at a decent hour. We had scheduled a field trip with our best friends on Friday and had an early start. 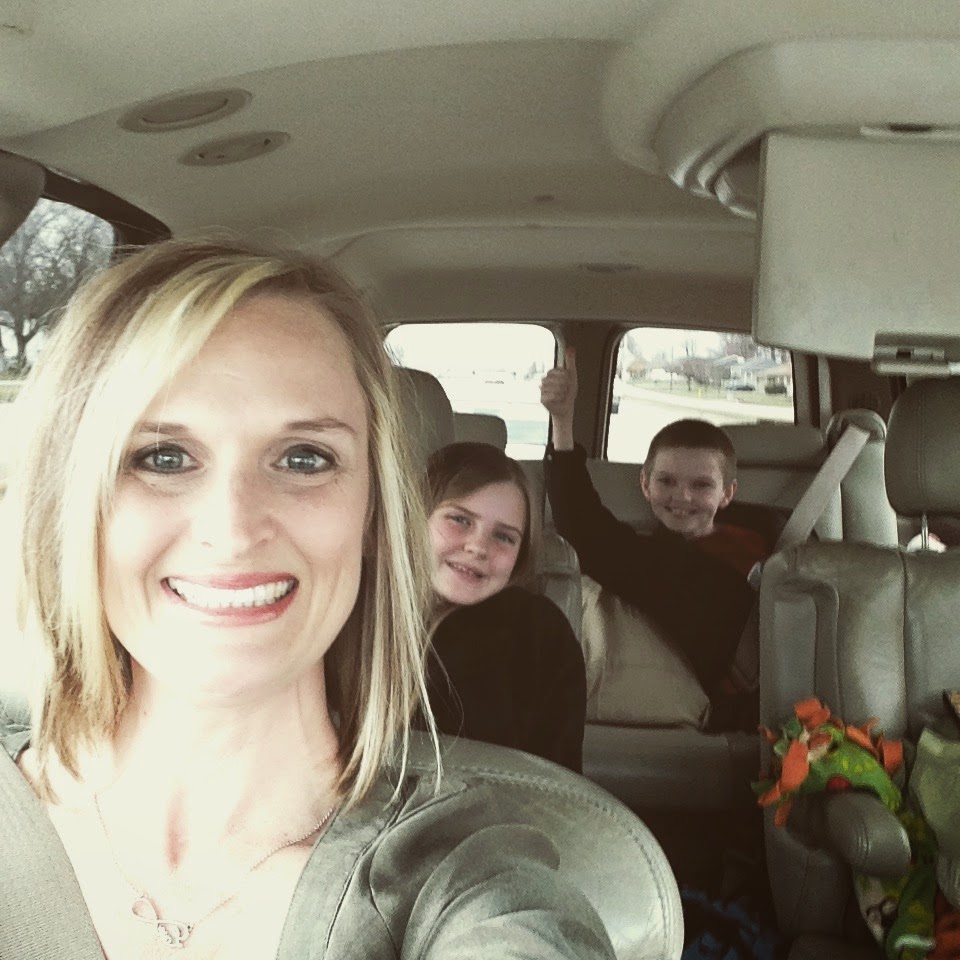 Friday morning we drove to our friends' house to see the progress on their new farm and to visit with their little donkeys. Of course Brynne was in love! 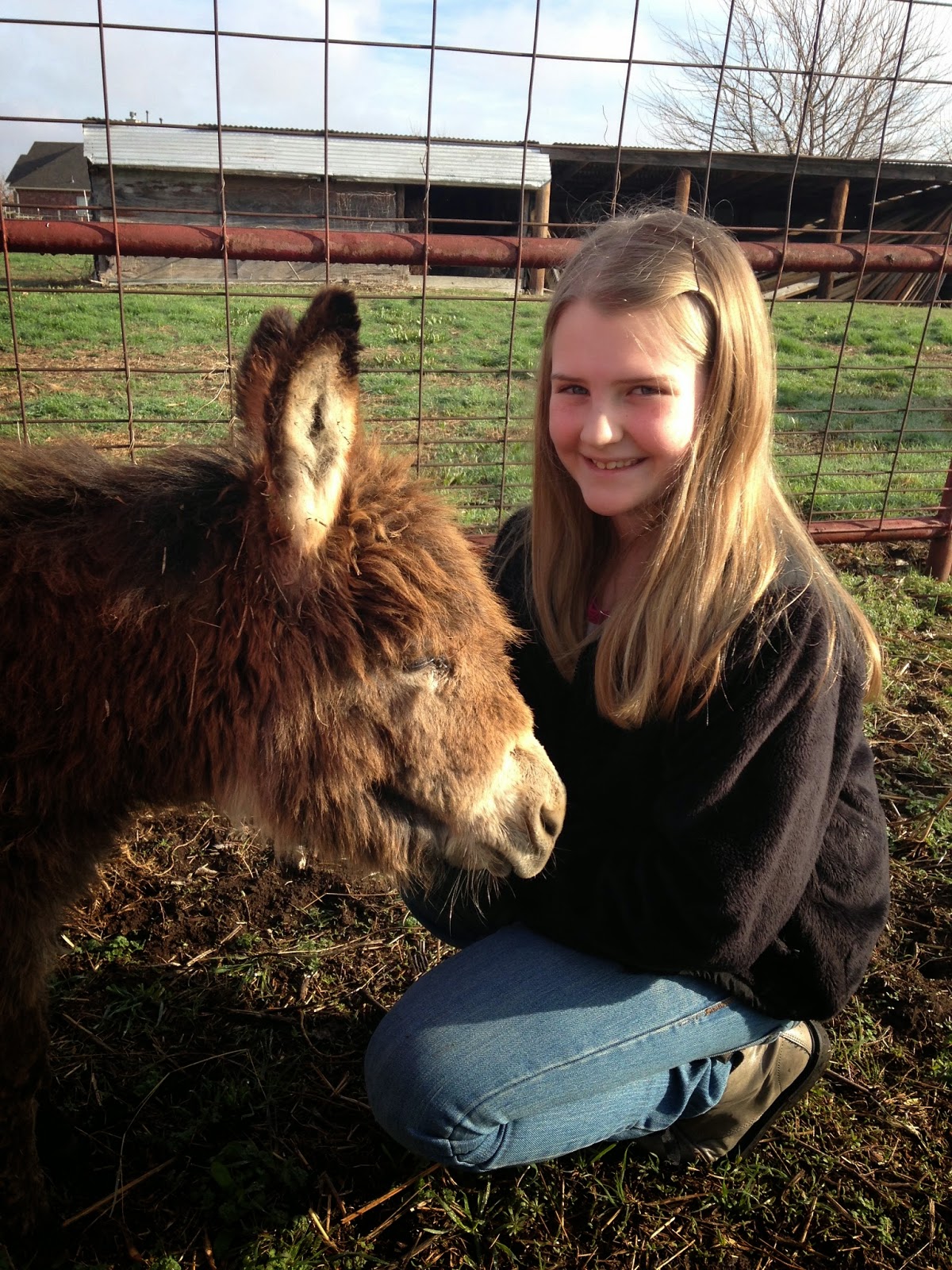 The first stop on our field trip was the Dewey Hotel and Museum in Dewey, Oklahoma. We missed the seasonal opening by one week, but we were able to look in the windows and roam around the grounds. The hotel was originally built in 1899. I really wish we could have gone inside. The rumor is that it's haunted! It also has the original jail in the back. It's all pretty cool. 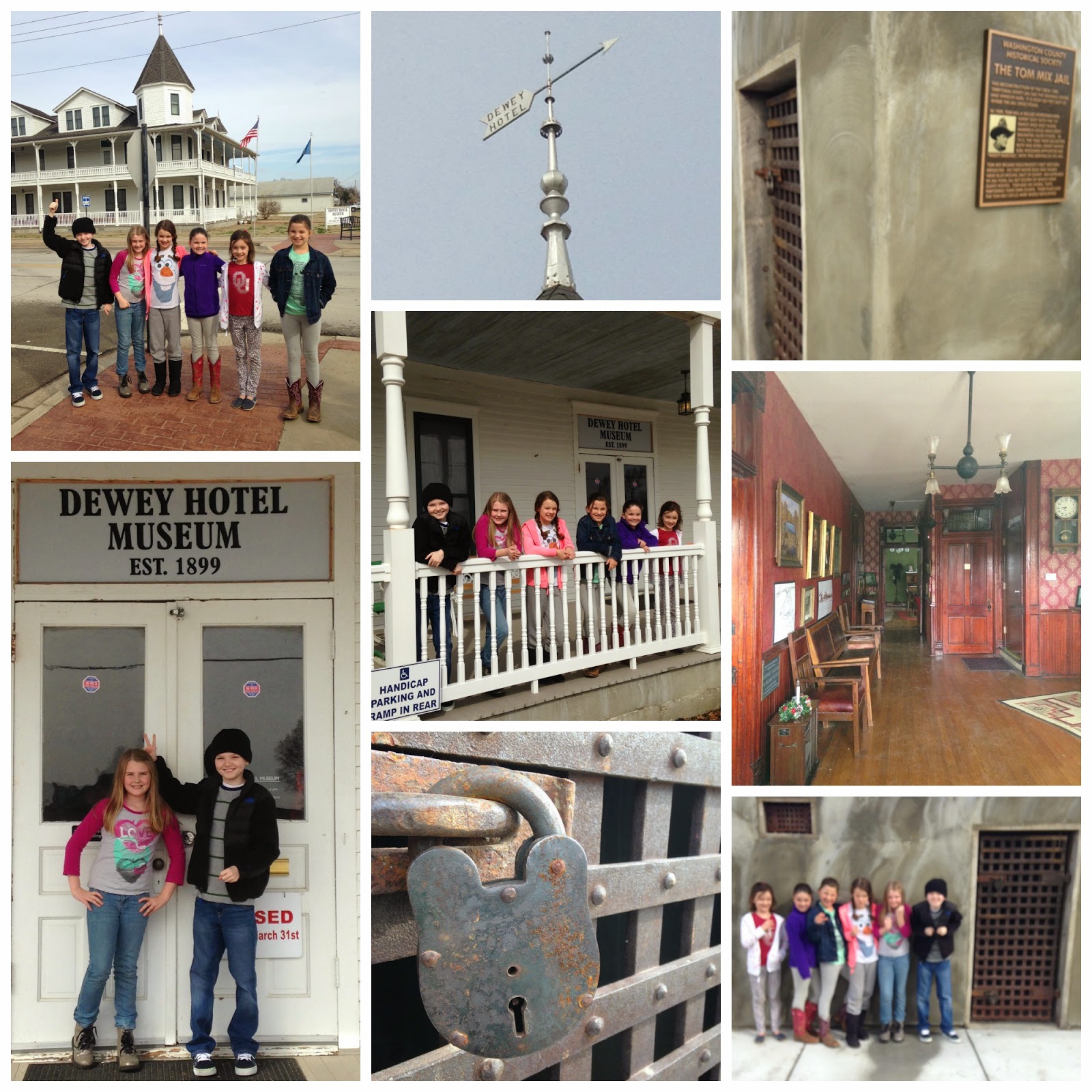 Next was lunch at Pies & Such in Bartlesville, Oklahoma. It looks like quite the dive. To use the restroom we had to go around to the back of the building and enter through the kitchen area. The wiring was messed up so we couldn't even shut the door to use the potty or it was pitch black dark. When we walked out the homemade bread was cooling on a rack just outside the bathroom. It seemed a little unsanitary. There weren't any lights on in the restaurant while we ate. I wondered how the restaurant could actually pass an inspection. And the waitress looked alarmed that us three moms were coming in with six kids, but she seated us and took our orders. 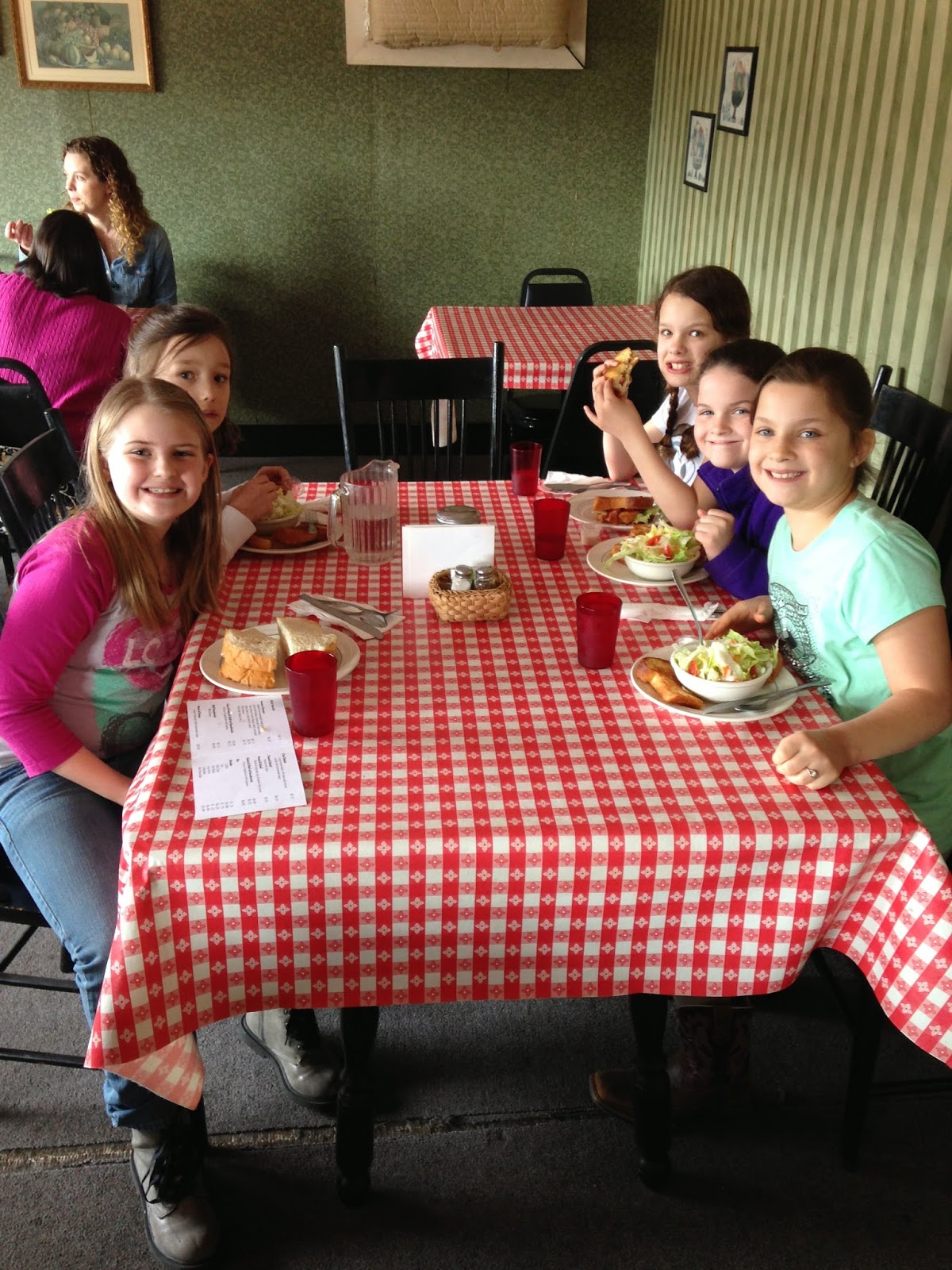 This is the kind of place where you can get a sandwich (on homemade bread), the soup of the day, a salad, and/or the one special offered, and that's it. The kids all got sandwiches and I ordered the meatloaf special. Oh, yum! And the kids absolutely loved their sandwiches! Top notch food! Then we ordered several different slices of homemade pie. Again, wow!! We were complimented by the waitress who told us that our children were the best behaved they had ever had come into the restaurant. I highly recommend this restaurant, although the ambience leaves quite a bit to be desired. We were on a pioneer field trip, so it fit perfectly with our theme of the day! I am so glad we gave it a try! 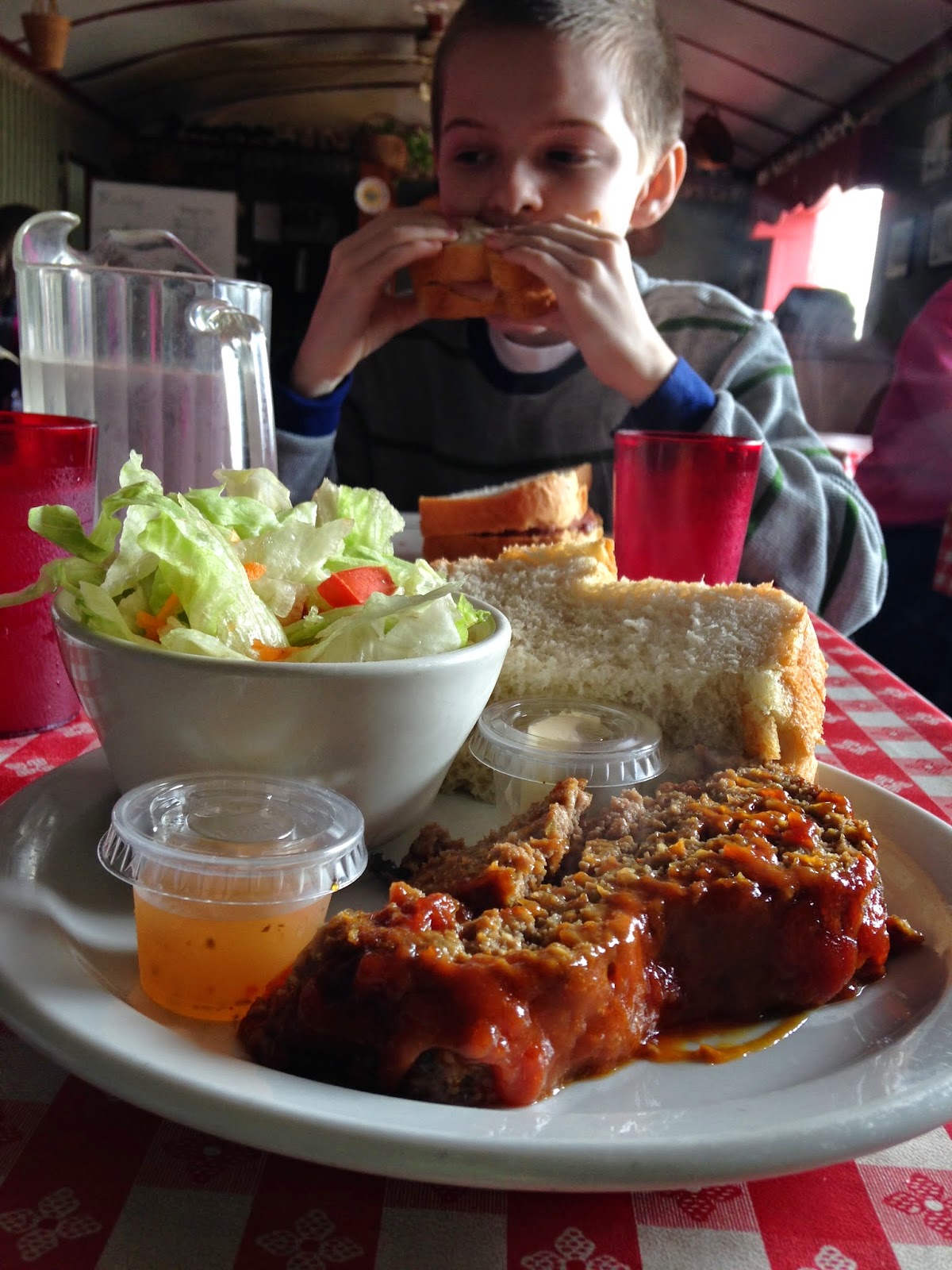 Our next destination was to climb on and tour a 1903 steam locomotive. This was the kids' favorite part of the day. Eli pretended to be a train bandit and chased the girls all over the train. It was fabulous! And HUGE! It was cool for the kids to see an authentic steam locomotive. And they even got to get into a train car like the one that Mary and Laura were in on the runaway train of Little House on the Prairie. 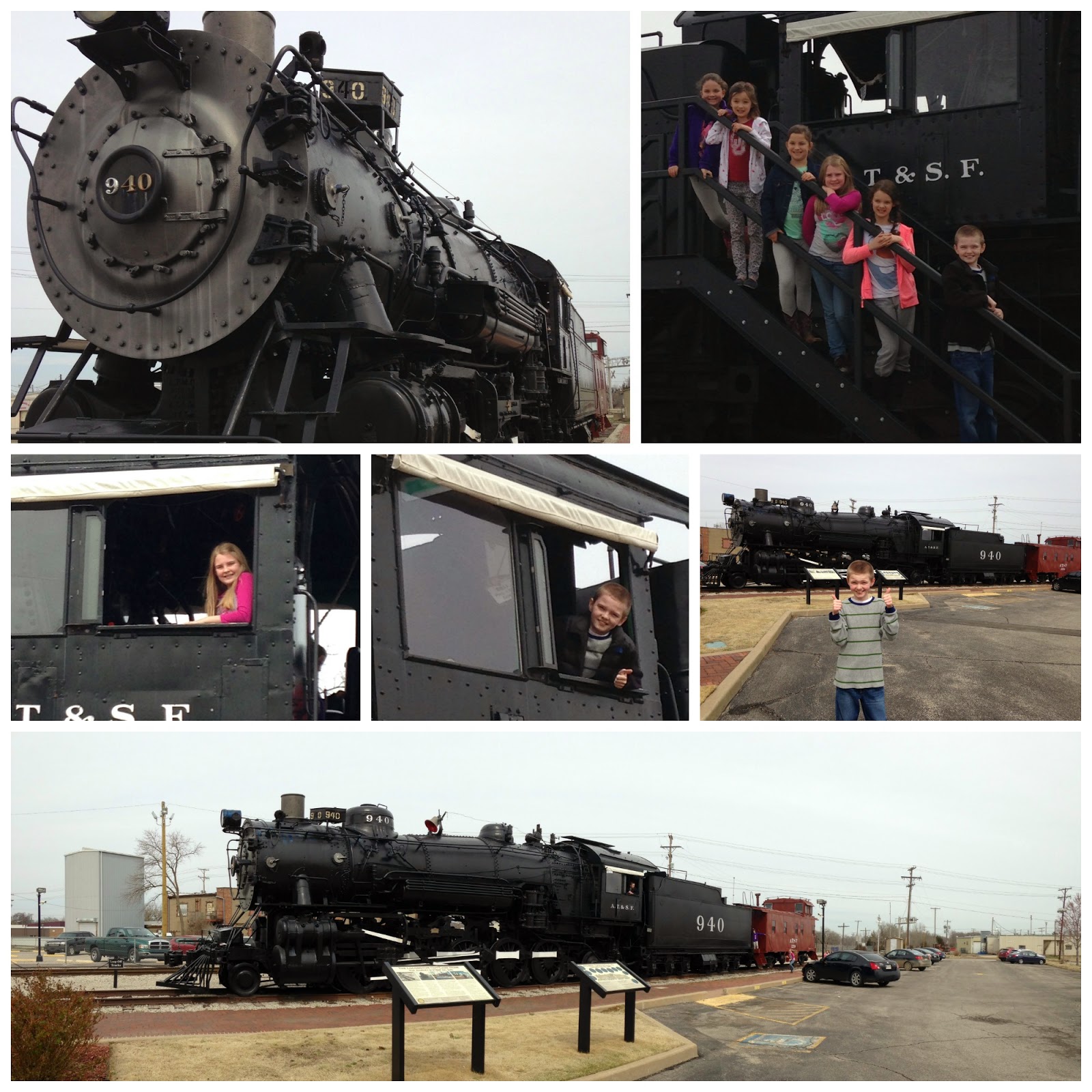 The final stop was at the Nelson Carr One Room Schoolhouse. The kids got dressed in period clothes that we brought from home and then had school with the school marm for about an hour. She took them through several different lessons and the rules of the school. The kids got to do spelling and math problems on slates and use quill and ink pens. They had to take turns reading out of the McGuffey's Reader. They had to raise their hands, step out of their desks and stand to answer questions, etc. They loved it!! It was a really great experience! So fun! 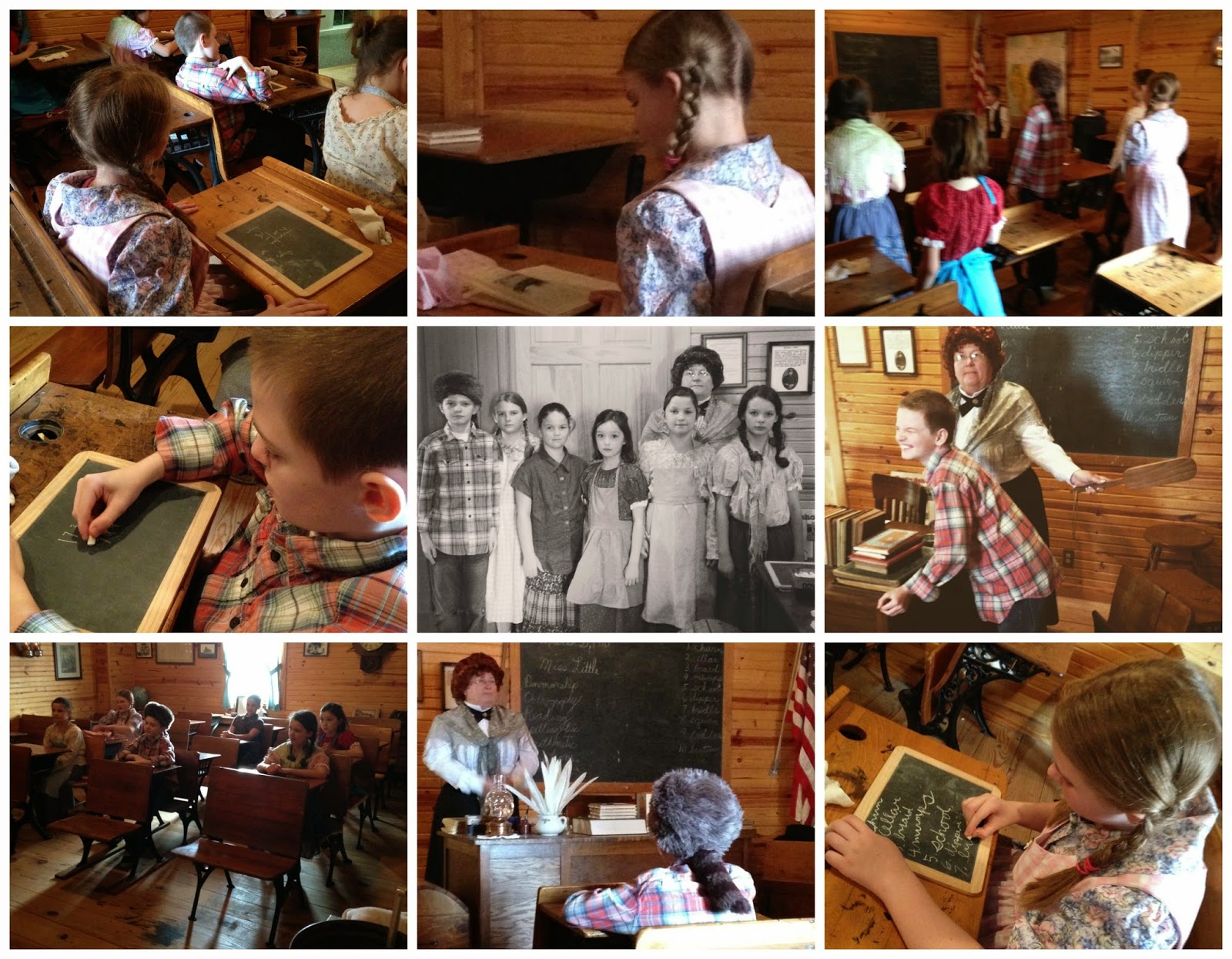 Just before we left town we decided to stop by Keepsake Candles. The owner showed us how they make candle molds and they each dipped a wax ornament. It was a neat way to end the day. 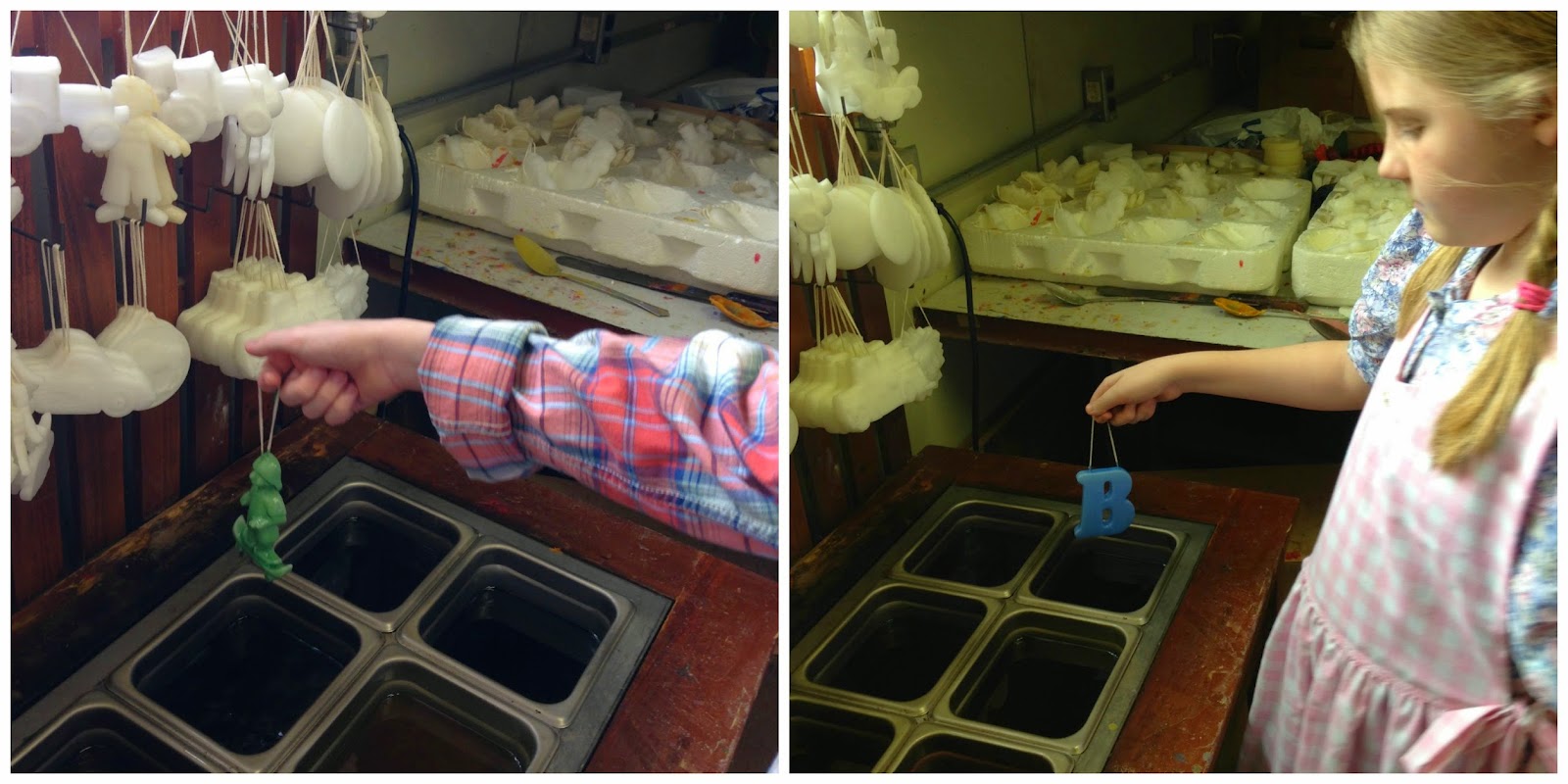 We were exhausted after our fun day so just came home and played some cards with Rick's sister and brother-in-law before getting to bed.

On Saturday Rick and I took the kids to a really cool retro bowling alley in downtown Tulsa called Dust Bowl. It only has 8 lanes and you have to score your own games the old-fashioned way. It was a lot of fun and we really enjoyed it! 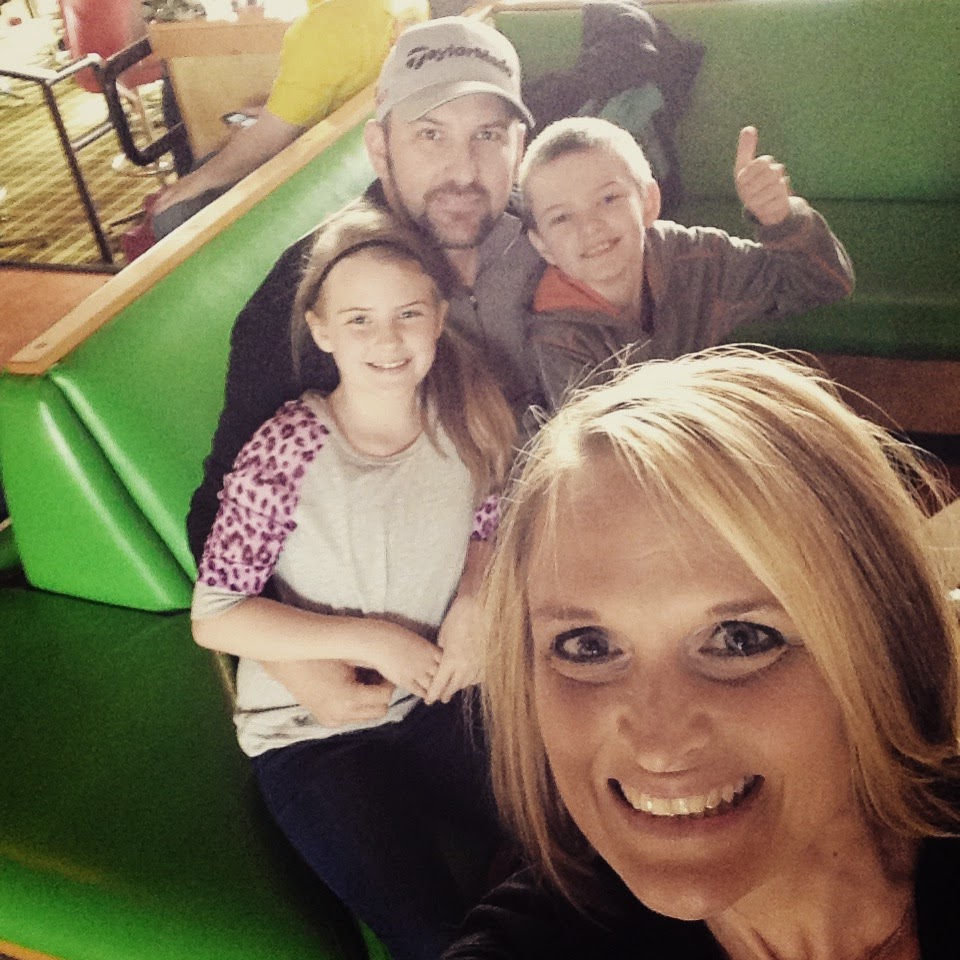 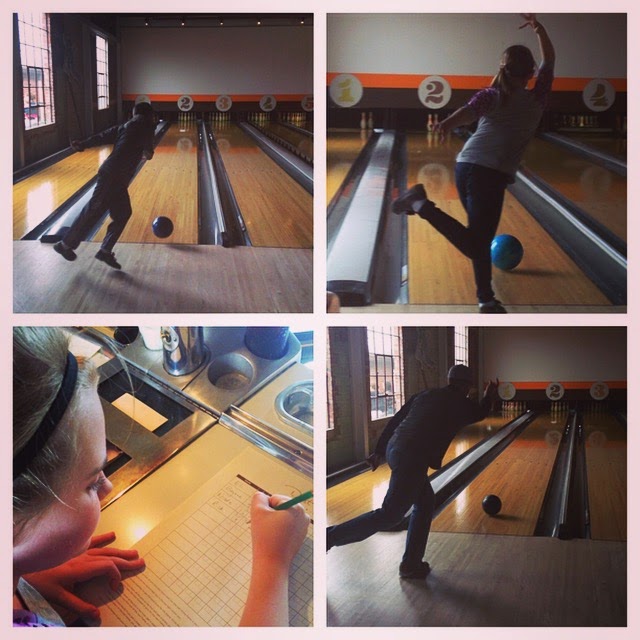 We came back to the house and had a dinner to celebrate the birthdays of our nephew and his wife and Rick's step-dad. We also played Ticket to Ride before bed. We slept in on Sunday and then got up and enjoyed breakfast with Rick's family and one final game of Ticket to Ride. Early afternoon we loaded up the car and headed back to Missouri. 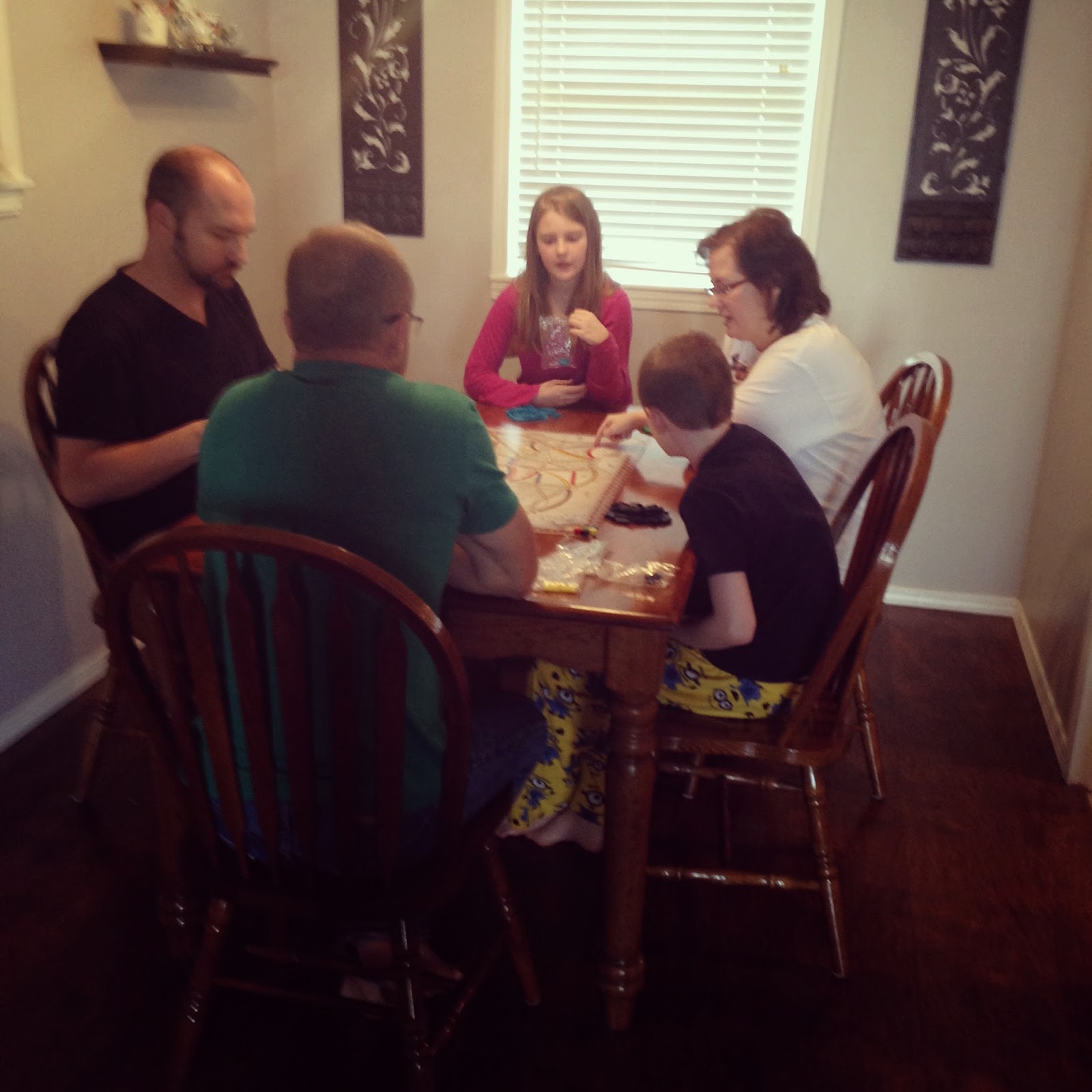 And Spring Break was over.

Last week we were feeling the effects of a week off, but we trudged ahead. You can always tell when we are getting to the end of our school year because we tend to taper off on our hands-on activities and just stick to the basics, reading, and watching lots of videos. You can just tell we are tuckered out.

We have started reviewing fractions with our dvd series "Mastering 5th Grade Math". When we start summer school in June we will move onto Math U See Epsilon and really hit fractions hard. But for now we are reviewing what we already know. We continue to identify parts of speech with IEW's Fix It-Grammar "The Nose Tree". We do our Bible lesson every morning, watch CNN Student News, and read out of our personal books every day.

Lunch this week consisted of working out with Wii Fit that the kids borrowed from their Aunt Julie. They have become quite the yogis this week! 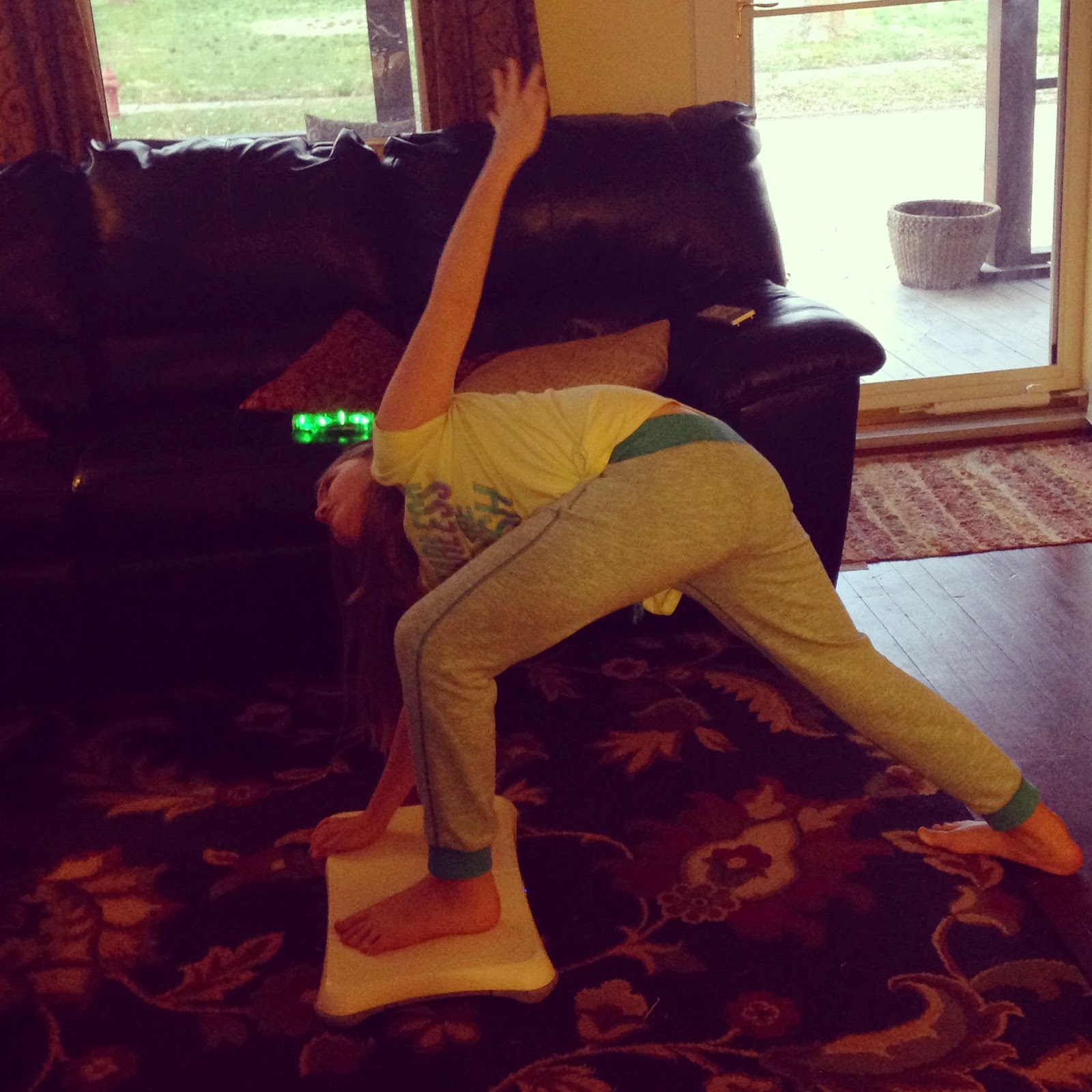 Add that to Brynne's Girls on the Run class and she did a lot of working out his week. While Brynne was at GOTR, Eli was at Lewis and Clark class trying some new foods he has never eaten before. According to his teacher he was a real trooper.

In the afternoons this week we read out of Little Town on the Prairie and watched some episodes of Little House on the Prairie. The kids also watched some of the Ken Burns documentary Civil War each day. (It was crazy to compare what was going on in the Little Town on the Prairie at the same time the Civil War was brewing on the East coast. It seemed like they were living in different worlds!) For Science the kids chose to watch an episode of Brain Games each day. That show is fascinating and very entertaining!

And that's how we pretty much spent our week. This coming week we will be adding in some memorization of the presidents, but will very likely be doing much of the same as last week. We are just so ready for our May break.

How about you? When will you finish your school year? 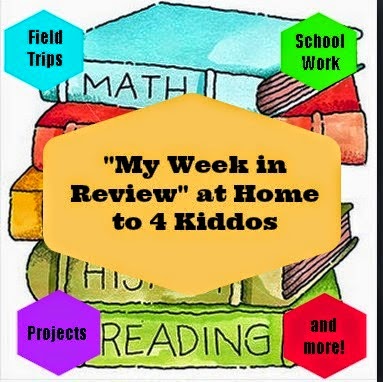